You know how you sit for a moment after a vacation and think to yourself, one day ago I was doing this or that, or three days ago, I was at such and such a place…?

And so I recall that four nights ago, I was seated at this very same hour, in Rhapsody, a restaurant on Adams St in Chicago’s Loop neighborhood, hundreds of miles from here. Kerry Lee and Jeanie were there. We were hungry.

We were walk-about mellow, having done, we figured about 3 miles of walking from the moment we all set foot in town, debarking at Union Station on different trains and the Megabus. (OMG, the Megabus! who would have thought it was such a direct  express and somewhat stylin’, too, a nouveau two-decker bus with WiFi and 110v outlets.)

We perused the menus and chose quickly. We crowed over our baby lettuces salads when they came, in anticipation of our entrees.  Kerry had gorgeous little gnocci that resembled birds eggs, and Jeanie and I both had the goat cheese ravioli and oh, the sauce in which it was bathed…mmm!).

Earlier that afternoon, we met in the lobby, as if by wizardry, recognizing one another instantly though we’d never met and off we went, east to the Art Institute, then north on Michigan Ave, ogling stores, chatting, pausing to take pictures, on and on and on we pressed, found a lovely corner cafe bakery and even here we snapped pictures and chatted away.

It’s lovely lovely lovely when you strike a certain sympatico with two other people you had come to know over 3 years of blogging.

I’m not going to rave and rave and rave (though i could) but  I will just say that having been a non-participating member of two other blog meetups (they were daughter Nor’s events and I just happened to be there), I have learned and thoroughly agree that “bloggies” (as named by husband HM to refer to “blog friends” ) are awesome people and having a “meet up” is an entirely grand event.

We had moments of walking along, not saying anything, we moments of excitement regarding art, the lake, the discovery of things in common, we chatted about our kids, dogs and politics, we oohed and aahed over classic art, we wandered without a schedule and completely comfortable with it, darted hither and yon taking pictures, sat on stone walls and took in all the sights and enjoyed some (seriously) fried food on the Navy Pier – all of it was fun and easy and interesting and…wow, I”m glad we planned to go and really did it. That’s the only plan we made – to meet in Chicago (and Kerry found us a hotel) and the rest just kinda happened.

Maybe next time we’ll take along Nor and some of her bloggies because some of hers know some of mine and there are many shared interests, not the least of which is French, food and art and writing and books..and of course, blogging.

There’s tons to tell and yet I am somewhat mute as dusk encroaches. Pictures will suffice.

Kerry and Jeanie, at the Corner Bakery (one of them)

Fog on Michigan, blowing up against the Water Tower… 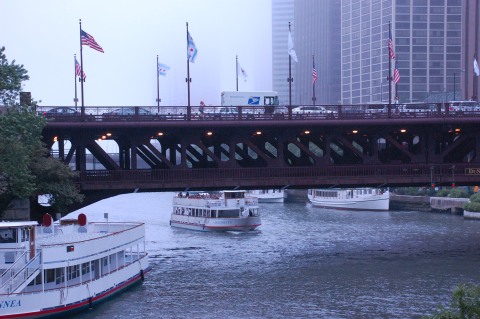 Water taxis at Michigan Avenue’s DuSable Bridge on Chicago River, not far from the Lake. Egads, we walked way up the Avenue and marched down it again, but there were MANY distractions along the way, not the least of which was H&M, full of perfect “finds” for artisan Jeanie and scarf-o-maniac me, and then the Hershey boutique where we all exhibited amazing self control after enjoying the free “kiss” given to us each upon entering the shop.

The view from my hotel room included a Calder sculpture!

(battery running low and more pictures to share and lines to write….TBC!)

You are currently browsing entries tagged with navy pier at This Writing Life ....